The video-on-demand market is a fairly young industry. In the past few years, the demand for streaming services has grown at a high rate. Streaming has almost completely displaced the DVD market and has even been able to compete with cinemas, but given the success of previous years, companies need to look for new opportunities for growth.

Trends and prospects for the development of the streaming services market

Part of the video-on-demand market was helped by the pandemic COVID-19 – due to lockdowns, people were looking for a virtual way of leisure and streaming services were among the leaders due to the abundance of content and relative cheapness.

Despite the explosive growth in the previous 5 years, research agencies predict further growth in the sector, albeit at a slower pace. According to Statistathe average growth of the streaming market in the next 6 years will be 11%.

The slowdown in growth is largely due to the widespread use of this type of service. In 2021, in developed countries, from a third to half of the population had a subscription to at least one of the services like Netflix or Amazon Prime, while many households subscribe to several services at the same time. The growth potential for streaming companies in these markets is very limited, so the expansion of services in large emerging markets, such as Asia or Latin America, could be the main catalyst. 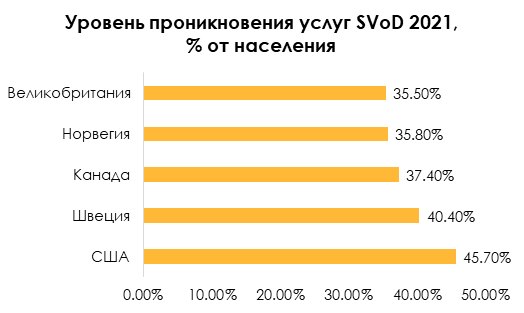 Competition has become another important factor in the development of the market. Now there are several key players in the streaming market that are forced to fight for the audience. The main lever of influence on the consumer is still the quality and quantity of content, because the absorption and retention of users is mainly carried out through high-profile releases (Stranger Things at Netflix, Obi wang Kenobi at Disney+ and so on).

Companies that are young in the streaming market continue to increase their influence. We believe that one of the main reasons remains the relatively low base. Market SVOD has changed significantly over the past year and is already considered mature, so the exit of the audience in favor of fresh players offering completely new original content is a natural, but limited in scope, phenomenon. 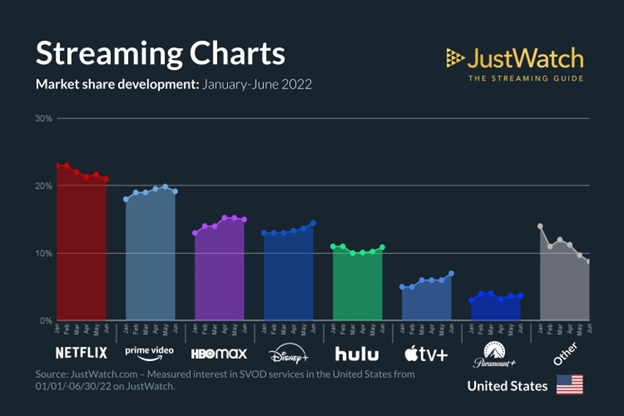 The long-term prospects for consumerism are tied to the success of original franchises, and we believe that in this regard Netflix remains the leader in the global market, although it will lose part of its audience in favor of competitors.

The hot topic this year remains the expected recession in the US and the EU, which are the largest markets for streaming services. In our opinion, the industry will calmly pass the period of economic slowdown and falling real incomes of the population. Streaming remains cheap entertainment – at a very moderate price, a large library of content is offered to subscribers, so the sector can go into recession as a substitute for other, more expensive activities (like going to the cinema).

An important criterion in the analysis of the market in terms of recessionary expectations remains the factor of cross-subscriptions to several services at once. Poll Leichtman Research As of September 2021, approximately 58% of households using streaming services have a subscription to 2 or more services. In the paradigm of falling real incomes, this fact means a potential decrease in the revenue of the broad market, as households may refuse to use several services in favor of one.

Monetization as a growth driver

The growth of the sector was ensured not only by the acquisition of new customers, but also by stable growth ARPU in the sector. decline ARPU at Disney due to the company’s entry into new markets – the company began to absorb cheaper subscribers, which explains the rapid growth of the service’s customer base. 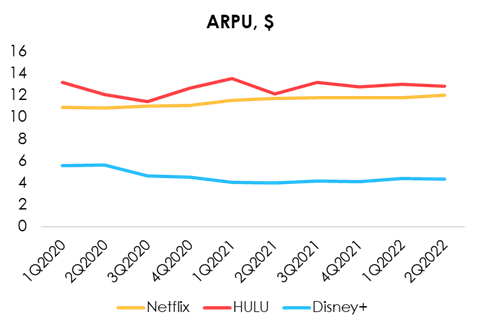 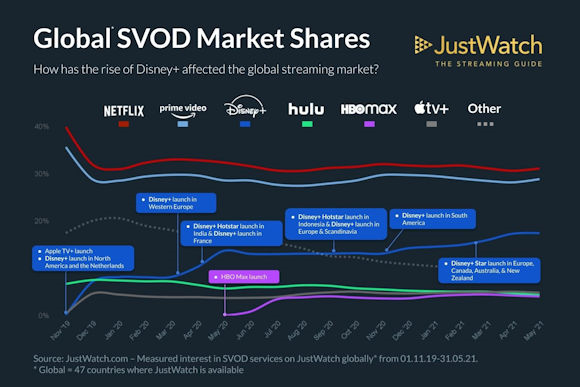 In the long term, all companies are forced to raise the cost of a subscription. The potential to absorb new subscribers is shrinking every year, while keeping old ones requires constant investment in content. Streaming services cannot sustain growth by capturing new subscribers, so the sector’s future prospects are largely tied to players’ ability to raise rates.

On the other hand, an increase in the cost of tariffs is usually accompanied by a higher rate of outflow of consumers. Given the growing competition, the reaction of the audience to the price increase may be even stronger. According to the June survey WhipMediaApproximately 69% of those who canceled their subscription cite price increases as the reason. 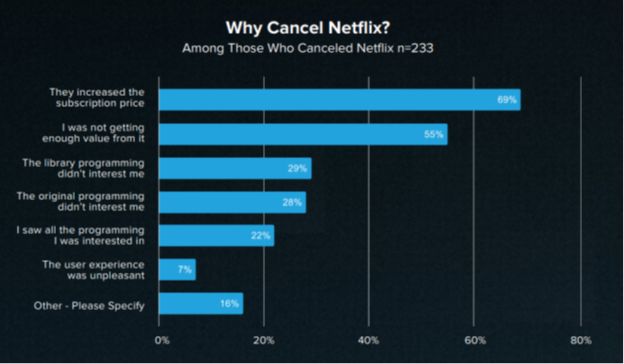 Companies in a competitive environment will have to choose – either continue to raise ARPUrisking seeing higher consumer churn, or testing the quality of business margins as content investment continues to increase and subscriber growth fails to maintain previous momentum.

Representatives of the sector who have other sources of income (Apple, Amazon, Disney) can afford expansive market capture through pricing policy, as core business revenues can support low-margin segments (if future prospects match costs). But since even the most expensive subscriptions remain relatively cheap compared to similar activities for the average household, content quality will dominate consumer choice in the long run. Therefore, we do not expect significant dumping for the sector in the foreseeable future.

find a compromise between growth ARPU and the absorption of subscribers can help a new monetization model of the service – cheaper versions of subscriptions with support for ads. Companies that already offer cheap tariffs with advertising demonstrate a fairly high consumer loyalty to the segment. 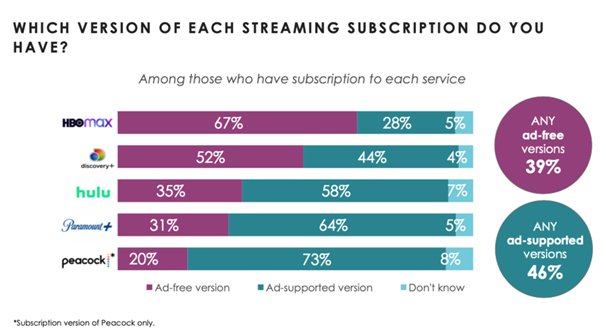 In the context of the current decline in the online advertising market and the reduction in the budgets of large companies, new tariffs may not immediately have a positive effect on ARPU “However, we believe that this initiative will have a positive impact on the companies’ financial results in the long term.

Currently, on-demand video views account for about a third of total video content consumption in the United States, and advertising on such services is more effective than on TV due to more advanced targeting. Transition of major streaming platforms such as Netflix or Disney+ the new subscription model can significantly affect the advertising market as a whole, as it will cause the flow of advertising budgets to new players. 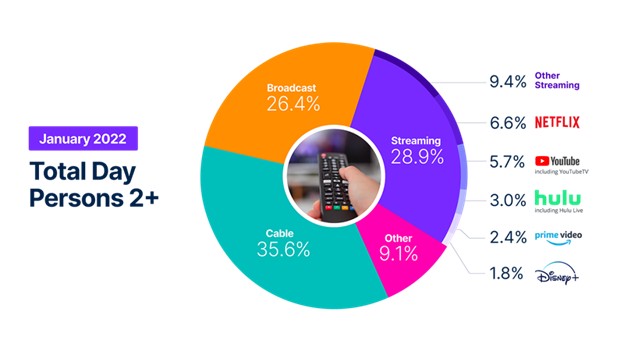 Thus, we expect a further increase ARPU in the sector. With the introduction of a new monetization model, companies will be able to increase the cost of tariffs and at the same time not set new records for the rate of outflow of consumers, as a cheaper alternative will appear for a price-sensitive segment of the audience. Providers will be able to make up the difference in subscription costs with advertising revenue, which, given the widespread use of streaming, is unlikely to be negligible.

Netflix and its temporary difficulties

Netflix has long been a key figure in the development of the market SVOD. The company was a pioneer in the industry and remains a leading player today, although in the last year it has had to face new market realities and certain difficulties.

Loss of subscriber share, mainly due to competition, is an inevitable scenario for Netflix, however, the effect is mainly observed in developed markets, where the distribution of the service was almost ubiquitous. For example, in the US market share Netflix in 2021 (based on annual revenue) was about 40%, so the observed user churn in 1H 2022 against the backdrop of a deteriorating economy and increased competition is an expected scenario.

An important bet Netflix remains the Asian market, where the company has been actively investing over the past few years. Subscriber growth rates in the region remain strong, while the company still has a lot of room to increase the value of subscriptions in the region.

Also, the exit of customers, as mentioned earlier, is partly due to the company’s policy to raise prices, but already in 2023 Netflix plans to adapt tariffs with built-in advertising, so the effect of the price increase will be smoothed out by the new tariff option. We believe that growth ARPU will become the main driver of financial results Netflix.

Another important problem for the company in the last year was the so-called subscription sharing, when accounts were used by several users at the same time without creating Netflix added value. The company’s management is still looking for a way out and is testing a new strategy in some Latin American countries, where the problem of sharing is most acute.

Now the consumer is asked to pay extra for sharing, and the cost of the additional payment depends on the number of users. According to the results of testing for the 1st half of the year, the management was quite satisfied with the results. Based on the company’s financial statements, ARPU in the region increased by 15% y/y, while the number of subscribers at the end of the period remained practically unchanged. Later, Netflix will expand the geography of the new function and, in our opinion, will be able to solve the problem of sharing by creating an additional growth factor ARPU.

We cover Netflix as part of our analytics, so our subscribers receive quarterly updates on the target score and detailed commentary on the company’s activities and prospects.

The streaming market is now forced to face new conditions shaped by competition and consumer behavior. Nevertheless, we remain positive about the long-term prospects for the industry, and even within the framework of recessionary expectations, we do not expect much negative in it. While the sector’s potential has dwindled in many ways, expanding business geography in emerging markets and new monetization models will be the main catalysts for growth in the coming years.

Special: Revaluation of the oil and gas sector - tax increases